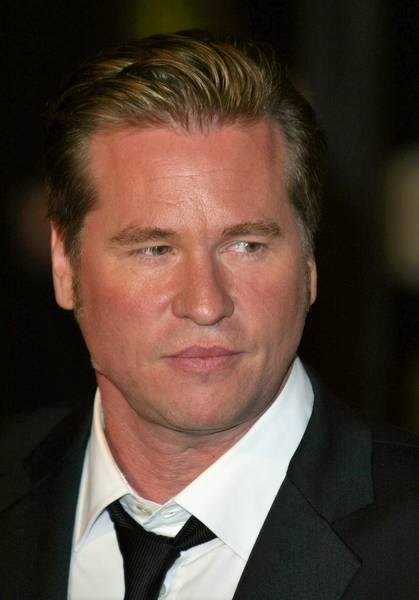 Val Kilmer is one of the most prolific actors of his generation. From his work as a career military officer in David Mamet’s Spartan, through his work with Oliver Stone in The Doors and Michael Mann in Heat, to his early work in Top Gun, Kilmer has worked with many of film’s most respected directors and actors.

The youngest student ever admitted to the drama department at Juilliard, Kilmer made his feature debut in the comedy Top Secret!, which he followed up with Real Genius and his breakout role as the Iceman in Tony Scott’s Top Gun, opposite Tom Cruise.

Other memorable roles include Jim Morrison in Oliver Stone’s The Doors, the title character in Batman Forever, Doc Holliday in Tombstone and Simon Templar in The Saint. His other starring roles include Michael Mann’s Heat, with Robert De Niro and Al Pacino;True Romance, directed by Tony Scott; Ron Howard’s Willow; At First Sight; and Thunderheart.

He won the 2003 Prism Award for his work in The Salton Sea, and appeared in the 3-D epic Wings of Courage, as well as voicing the characters of both God and Moses in the animated film The Prince of Egypt. Kilmer’s films also include Oliver Stone’s Alexander, Renny Harlin’s Mindhunters, the animated feature Delgo, Ron Howard’s The Missing and Wonderland. Kilmer most recently starred in MacGruber, a comedy based on the SNL spoof sketch of ‘MacGyver’.

During the production of Wonderland, Kilmer began a photography/art project with creative partner Ali Alborzi that blossomed into a behind-the-scenes pictorial book and traveling art show. Released by Pocket Book, the photographs were exhibited in several cities in the United States, Japan and Europe. Kilmer has also published a volume of his own poetry titled My Edens After Burns.

When Kilmer was at Juilliard, he co-wrote the play How it all Began, based on the true story of a West German radical. The play was directed by Des McAnuff and produced by Joseph Papp for the Public Theatre. He made his Broadway debut in the 1983 production of Slab Boys, with Sean Penn and Kevin Bacon. He also appeared in Papp’s Delacorte Theatre production of Henry IV: Part One, As You Like It, the title role of Hamlet and ‘Tis Pity She’s A Whore, also at Papp’s Public Theatre.

Kilmer then starred in the Max Azria produced musical The Ten Commandments as Moses at the Kodak Theater in Los Angeles. In 2005, he starred on London’s West End at the Playhouse Theater in Andrew Rattenbury’s adaptation of The Postman Always Rings Twice as Frank Chambers, the drifter played by Jack Nicholson in the 1981 film version.

After writing, producing and directing his acclaimed one man show Citizen Twain, Kilmer toured the U.S. with the film production of aptly rechristened Cinema Twain. He took a bit of time off touring to appear in TOP GUN: MAVERICK, reprising his role as Tom “Iceman” Kazinsky.

Val continues to paint and is a talented and prolific artist in a variety of mediums, leaning toward enamel paint on metal. His latest efforts have opened up the world of Web 3.  Along with business partner Ali Alborzi they started Kamp Kilmer, a sacred space for creative alike to come and explore NFT’s and many other forms of art.  His art can be seen in galleries and pop-up shows across the U.S and on the blockchain!

These stories and more are covered in the just-released A24/Amazon documentary film VAL.